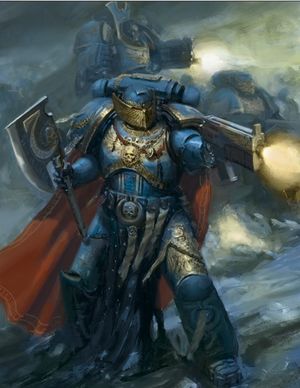 A Honour Guard of the Ultramarines[1]

Honour guards are two extremes, solemn and taciturn at peace but ferocious and unyielding in combat. They have achieved all awards and honours that a marine can, which puts them in a position of unrivaled knowledge. Often their experience and knowledge of warfare outstrips the Captains of a chapter, but to offer unsolicited advice would be to undermine the position of these captains. To this end, any advice given by an honour guard carries much weight within the command circle as well as among the rank and file. Even Chapter Masters have been known to seek advice from honour guards.[1]

Honour guard weapons and equipment are the oldest and greatest the chapter has to offer. Most often this includes ancient and ornate artificer armour and weapons which have had hundreds of previous users, all of whom were great heroes. Most chapters can muster only a handful of honour guards and only the largest chapters have over twenty guards. It is very rare however, that such a number would ever fight together.[1]

Often the honour guard will form the retinue for the Chapter Master, keeping him safe in battle as well as carrying the Chapter Banner. They fight with a cold courage, their experience and abilities help them to calm the rage of combat whilst maintaining lightning reactions and instant analysis of battle conditions. This strength has turned the tide of many battles and saved the life of several chapter masters. When one of the honour guard dies in battle, his brothers fight all the harder to recover his body and return it to the chapter's Vault of Heroes.[1]

During the Great Crusade, it became traditional for the primarch of a Space Marine Legion to be accompanied by an elite bodyguard unit, frequently equipped with Terminator armour. Units of this kind included: