Space Marine Landing Craft are large orbital-assault vehicles designed to quickly deliver vehicles and troops to a planets surface. Within twenty or thirty seconds of leaving their spacecraft, any troops and vehicles will be on the ground and in action.[1]

The Landing Craft is armed with various weapon systems such as multiple Storm Bolters, twin-linked Heavy Bolters and a pair of turret-mounted Lascannons and is equipped with large hydraulic clamps to transport Space Marine tanks in a similar fashion to the Thunderhawk transporter.[Needs Citation] 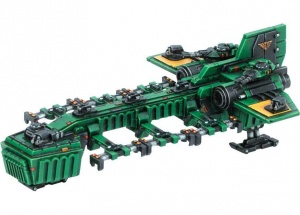