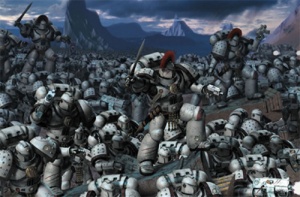 The Luna Wolves on the Great Crusade[28] 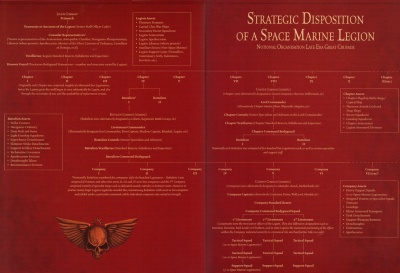 The Legio Astartes, being far larger than current Space Marine Chapters, were organized along drastically different lines. At the head of the Legion was its Primarch Commander who oversaw the Legion's headquarters. Below this were the Chapters of the Legion, each of which was commanded by a Chapter Commander. Each Chapter in turn was divided into a number of Battalions, each of which was further divided into Companies. The Company, itself divided into a number of Squads, was the basic military division of the Legio Astartes. Due to the varying sizes of each Legion, there was no fixed number of how many Chapters, Battalions, Companies, and Squads a Legion would contain.[7b]

The Emperor saw no problems with this development; the loyalty of the Primarchs to him was believed to be unshakable. This reasoning would be proven to be mistaken as half of the known Legions revolted during the Horus Heresy.