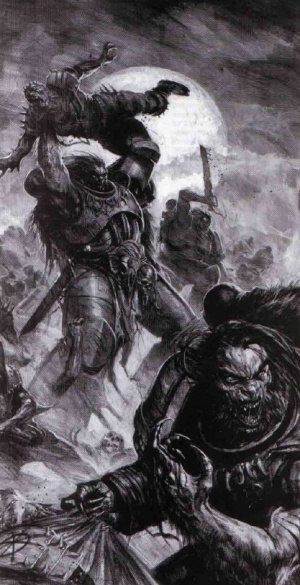 Dekk-Tra, the 13th Great Company, was one of the original Great Companies of the Space Wolves Legion of the Adeptus Astartes. Known as Wulfenkind, or the Wolf Brothers[3], they disappeared during the Horus Heresy, only to re-emerge from the Eye of Terror during the Thirteenth Black Crusade.[7]

The 13th Great Company was formed from the followers of Leman Russ from his days on Fenris before the coming of the Allfather, despite the warnings of the Mechanicum that they were too old to undergo the transformation. Many died in the process. As such they were known as the "Greybeards" to the rest of the Legion, while they referred to themselves as the "Wolf Brothers".[3] Jorin Bloodhowl, one of Russ' original Einherjar honour guard, became the first jarl of Dekk-Tra, the 13th, which was considered the most honourable and the closest to Russ.[11a]

It was among the ranks of the Wolf Brothers that the Curse of the Wulfen first appeared, afflicting warriors in the heat of battle without any prior warning. During the Dulan Campaign, two Legionaries succumbed in quick succession - although the affliction had been seen before by Jorin and his huscarl, Bulveye. The Wolf Priest Ulbrandr Crowhame was unable to discover any physiological cause, neither was the Rune Priest Leif Hemligjaga able to detect any trace of maleficarum. Jorin resolved to keep it a secret, telling not even the primarch.[11a]

Bulveye later succeeded Jorin as jarl and led the Wolf Brothers as part of the 954th Expeditionary Fleet at the Battle of Kernunnos[3] and the Battle of Prospero, where they disappeared.[8]

The 13th Great Company was lost during the Space Wolves' pursuit of the Thousand Sons, following the Burning of Prospero, though the exact circumstances were considered a mystery to the Space Wolves of the 41st Millennium.[1a][1c] One legend states that the members of the 13th Company swore to hunt their foes down until every last one of the cursed marines was slain, no matter how long it took, nor where the traitors fled.[2] Although at the time of their disappearance, Bulveye was Jarl[8], in the 41st Millennium the Space Wolves believe Jorin Bloodhowl was Wolf Lord of the 13th[1c]. Several members have since claimed the title Jarl[10b] or Wolf Lord.[7]

They vanished from Imperial records, and their stone on the Grand Annulus (the record of Space Wolf Great Companies in the Great Hall of the Fang), was replaced by a black slab of obsidian.[1b] Since then, the subject of the 13th Company has become taboo among the Space Wolves, and it is forbidden to speak of them except in whispers.[1c]. The black stone on the Grand Annulus has come to represent all the Great Companies in the chapter's history that have disappeared, been destroyed in battle, or turned renegade.[1c] Before their disappearance, their totem was the sign of the Wulfen, but no Great Company has used that badge since the Heresy.[1c]

A force of Wolves of the 13th Great Company led by Grimur Red Iron hunted after Ahzek Ahriman using the visions of Scyld, a newly blooded Space Marine at the time of the Burning of Prospero who had found the wyrd in him during the hunt.[10a] They followed him out of the Eye into realspace as he sought the Athenaeum of Kallimakus, forced to kill members of the Ultramarines and White Consuls that barred their path at the Cadian Gate.[10b] Too late, Grimur discovered that Scyld's visions had been sent by Ahriman to manipulate them into attacking the Grey Knights strike cruiser Sigillite's Oath above Apollonia.[10c]

Main Article: Hunt for the Wulfen

At the end of the 41st Millennium, the 13th Great Company began to return to realspace across the galaxy, prompting the Space Wolves to send out numerous expeditions to find them and bring them back to Fenris before Imperial forces encountered them.[9a] Although partially successful in rounding the Wulfen up, they were sighted by Imperial forces who put together a Crusade Fleet which laid siege to the Fenris system.[9b]

Others emerged from the Eye of Terror during the 13th Black Crusade.[4][1d]

Shortly after the end of the Indomitus Crusade, it was discovered that up to 200 uncorrupted Heresy-era members of the 13th Great Company under Bulveye himself were still alive, trapped in a network of Warp Portals on Prospero. Njal Stormcaller and a force of Space Wolves managed to recover many of these warriors.[12]

One thing that sets the 13th Great Company apart from the rest of the Space Wolves is the large percentage of warriors who have succumbed to the Curse of the Wulfen. Whether the increased percentage of 13th Company Marines who have succumbed to the Curse is a result of their prolonged exposure to the Eye of Terror, or whether it existed before their disappearance is unknown.[4] However, Space Wolf legend describes Wulfen as the Thirteenth Wolf which stalks all of the Space Wolves.[5] 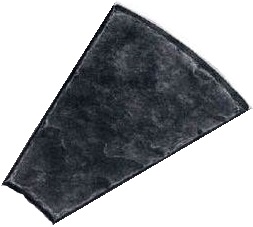 The fixed obsidian stone on the Grand Annulus inside The Fang, representing the 13th Company's absence from the Chapter.

Due to the lack of available reinforcements, resupply, or proper facilities, the 13th Company's organization and equipment departs heavily from Space Wolf norms. The 13th Company maintains the dark grey colour scheme of the Pre-Heresy Space Wolves, on what little remains of their original equipment. Much of their armour and weaponry has been replaced with material scavenged from their fallen Chaos foes. Not surprisingly, their Company has almost no heavy equipment such as tanks, Terminators or Dreadnoughts.[4][2] Because of the impossibility of recruiting new brethren, there are no Blood Claws in the 13th Company. Each and every Blood Claw has long since advanced to a higher rank.[4]

The core of a 13th Company warband is the Grey Slayers, which fulfil the same role as Grey Hunters. The Company's assault specialists are the Storm Claws. They are equally experienced, but still more hot-headed and aggressive than the Grey Slayers. The key to the 13th Company's movement through the Warp are the Rune Priests. Because the Eye of Terror has unlocked hidden psychic powers in many recruits, the Company has no shortage of these highly gifted individuals.[4]

Their most drastic departure from the rest of the Chapter is their willing use of the Wulfen in battle. Though normal Space Wolves sometimes use individual Wulfen in battle, the 13th Company use entire packs. Each and every member of the 13th Company carries the Curse, and it manifests itself in the Space Wolves at different times. The mutation's effects are even more pronounced because of the influence of Chaos; and yet, conversely, having to wrestle with this curse for so long has left the 13th Company exceptionally resistant to the malign influence of Chaos. It is believed that this is the only reason that the 13th Company - who have always remained loyal to Russ and the Emperor — have been able to survive for so long inside the Eye of Terror.[4]