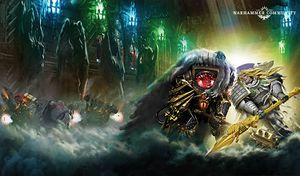 Russ battling Horus with the Spear of Russ

The Spear of Russ, known by the Emperor as the Dionysian Spear[6] and sometimes known as its hidden name Gungir[5] is a legendary artefact of the Space Wolves chapter, which was wielded by their primarch Leman Russ.

The Spear was forged by the Emperor himself during the Age of Strife inside His very first subterranean fortress[6] and contains a portion of His power. The sister of the Apollonian Spear, the Dionysian Spear as it was originally known has the ability to "illuminate" those it pierces, revealing to them some aspect of truth.[5]

The weapon was later given to Russ in the aftermath of the Wheel of Fire campaign as a reward, but he was made uneasy by the spear's presence and never took it with him into battle. He would often "lose" it on battlefields or "forget" it in conference chambers and he carried it only to please the Emperor. Despite his attempts to part with the weapon, it would always ultimately return to his side. While on Fenris, Russ saw a vision of himself that revealed the nature of the Spear and pierces the Wolf King with it, revealing to him the truth regarding the nature of the Primarchs. Afterwards, Russ became more fond of the weapon and used it in battle. Later during the duel between Horus and Leman Russ at the Battle of Trisolian, Russ used the Spear to not only badly wound the Warmaster but also restore a measure of his sanity and former glory, washing away much of the corruption that had come to plague him on Molech.[5]

Later on Yarant, the 13th Company seemed amused by the fact that the current Space Wolves view the relic with such awe.[2b] During the Battle of Yarant during the Heresy, Russ gave the weapon to Bjorn.[3]

Later sometime during the Great Scouring the spear was snatched up by the Wolf Lord Garm and used to injure Magnus the Red, primarch of the Thousand Sons, when Leman Russ stumbled in battle against him, buying Russ the opportunity to drive off the traitor, albeit at the expense of Garm's own life. The Spear was stored for millennia in the Shrine of Russ on the planet Garm, named for the Wolf Lord who fell there. Prophecies of the Space Wolves state that, when Leman Russ returns for the Wolf Time he will return to Garm to reclaim his weapon.[1a] The Spear was lost, however, when elements of the Thousand Sons, including the sorcerer Madox, stole it for use in a ritual to bring their primarch through to the material world from the warp. The Great Company of Wolf Lord Berek Thunderfist were able to interrupt the ritual, when (then Blood Claw) Ragnar Blackmane seized up the Spear of Russ and hurled it through the warp portal, stabbing the eye of Magnus. This stopped the ritual and closing the portal, but at the cost of losing the Spear of Russ into the warp.[1]

The spear was later used by Madox in a ritual that would cause all Space Wolves to succumb to the curse of the Wulfen, destroying the chapter and critically weakening the Imperium. Ragnar and several other Space Wolves made their way to the warp duplicate of the planet Charys in the Eye of Terror and, with assistance from elements of the Thirteenth Great Company, stopped the ritual before the damage was irreversible. With the help of Rune Priest Torvald the Reaver, and Gabriella Belisarius, Ragnar and the survivors return to Charys and the Spear was returned to Garm.[2a]

Later during the Siege of the Fenris System, the Spear was taken up by Egil Iron Wolf and used once again against Magnus.[4]