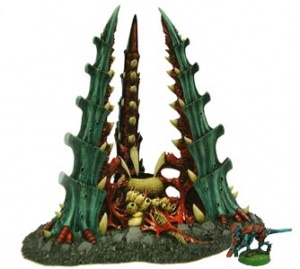 Spore Chimneys are a key part of a Tyranid invasion. They pump out alien spores which not only pollute the atmosphere but also quickly alter the native fauna.[2] Local vegetation will be replaced by highly aggressive alien vegetation. As the process of consumption accelerates, the sky darkens and the planet's temperature begins to rise. The surface is soon transformed into a hothouse environment, accelerating the process still further and optimising conditions for the next stage of consumption. Within days hordes of Rippers will have consumed the vegetation mass and added it to the digestion pools, where all the biological matter is broken down and ready to be collected.[1]

Imperial fire teams have learned that shooting these structures can cause a large spontaneous release of spores into the air.[2]