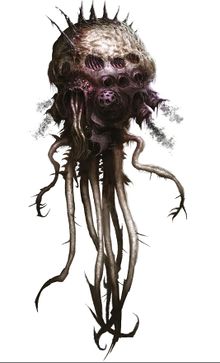 Spore Mines, or "floaters" (species name: Boletus minoris[Needs Citation]), are used by Tyranids as living, floating mines which explode if any non-Tyranid lifeform gets too close.[1]

Spore mines are grown and launched by Biovores. They grow deep inside a Biovore's body and are then launched via a powerful muscle spasm through the Biovore's dorsal aperture and hurled across the battlefield. An internal gas bladder in the spore mines inflates allowing them to drift down towards the ground, where they do not detonate upon impact but when they sense the proximity of a non-Tyranid lifeform. They have been known to drift for days, weeks or even years until an unwary foe comes too near. Alternatively, spore mines are also seeded onto worlds from orbit.[1]

Spore mines possess a rudimentary intelligence and are full of poisons, toxins, viruses and chemicals and are covered in sensitive feelers which seek out heat and vibrations. They are also able to sense nearby fire and will explode in the hope of killing the enemy firing. All of the spore mines in a cluster are linked, and when one explodes, they all do even if there are no enemies nearby. If the mine is killed it will also explode.[Needs Citation]

Spore mines come in one of three forms:[Needs Citation]