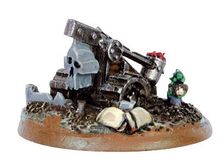 A Squig Catapult (or "Katapult") is an Ork weapon.[Needs Citation]

The catapult hurls a pot of squigs (known as Buzzer Squigs). They are scrounged from bits of scrap metal and wreckages of vehicles and form large girder-like structures with perforations to reduce the overall weight. Each section is bolted together before battle but can be carried by gretchin runts between battles. The ammunition is loaded onto a long arm which is held under tension by powerful springs. The arm can be wound back and released through a lever, flinging the arm forward and the pot of squigs goes with it.[1]

The accuracy of the weapon is notoriously poor as it can be fired randomly due to the high trajectory that the arm allows the pot to fly at, flying over any intervening terrain. This is overcome by the ability of the buzzer squigs to find their own targets. Enraged squigs emerge from the broken pot and swarm over any nearby enemies, although they will not attack any greenskin due to their dislike of the taste of the symbiotic algae which flows in their blood. Any unit which fails to defend themselves adequately are eaten alive, any tank crew are eaten rendering the vehicle useless or dreadnoughts have their circuitry ripped apart. Sometimes the buzzer squigs will disperse quickly but they may also stay together for some time, attacking other units nearby at random.[1]

When the catapult fails, it is usually quite spectacular, either it manages to destroy itself as the strain gets too much, or a minor fault prevents it from firing at all. On occasion a gretchin is loaded by mistake, sending it to its death as well as some of the enemies in its path.[1] 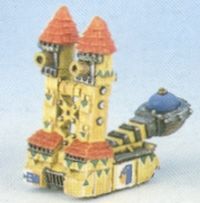