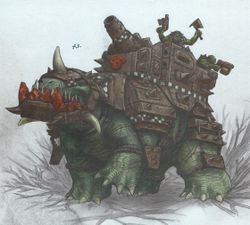 Amongst the largest of all Squigs, the Squiggoth is a massive quadrupedal beast (although it ranges in size from that of a main Battle tank to that of a Titan) kept by Feral Orks.

There have been woolly, tusked Squiggoths seen on battlefields, but the most common appears similar to a dinosaur. It commonly has a howdah on its back, where boyz ride into battle, shooting mounted guns, such as the Supa-lobba as they go. To protect their "ride", Orks usually add armour plating.[1]

As with all Greenskin organisms, the Magos Biologis of the Adeptus Mechanicus have identified Squiggoth's as fungal lifeforms, though they are fairly rare and can only be grown by the specialist breeder Pigdok of the Snakebites Clan. The size of the Squiggoth is determined by the effectiveness of the feed-formula the breeder gives his creature. Less-effective formulas may result in puny Squiggoths while high-quality formulas will see them keep growing and growing.[1]

Squiggoths themselves vary in size and shape, but there are two primary subspecies: