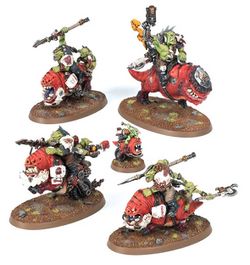 Tough, determined, and heavily armed, Squighog Boyz make up Beast Snagga fast cavalry and are designed to engage the enemy at close range. In battle Squighog Boyz unleash an unrelenting fury of attacks and are perfect for dealing with enemy light vehicles. They are armed with a variety of weapons including Stikkas, Bomb Squigs, their mounts themselves, and the weapons utilized by their Grot saddle companions.[2]