St. Josmane's Hope was the ninth planet of the Cadian System. It served as an Imperial military prison within the Cadian sector.[2]

The heart of St. Josmane's Hope was a vast continent-sized prison complex.[2]

During the 13th Black Crusade the Imperium lost the planet to Chaos due to massive prison riots and revolts. When it became apparent that St. Josmane's Hope could not be reclaimed, it was destroyed in order to prevent the armies of Chaos from using it as a staging point in their invasion of the sector.[Needs Citation]

The Fall of St. Josmane's Hope

In 999.M41 insurgent activity rose across the sectors surrounding the Eye of Terror with the aim of destabilizing the imperial defence lines before the launch of the 13th Black Crusade.[Needs Citation]

On St. Josmane's Hope subversive groups such as the Corrective Rehabilitation Movement aimed their efforts at the prisoners and tried to pit them against their gaolers. In the brutal fighting that erupted, contact was lost with the other worlds of the Cadian system.[4a] Isolated and unable to turn the tide many of the local defenders kept a bullet for themselves rather than allowing the raging convicts to take them alive.[2]

When the forces of Chaos begun to invade the planet they were initially greeted as liberators. However, the Chaos Space Marines of the Violators who spearheaded the assault, treated the inmates like slaves and conscripted them for their own cause.[2][4a]

The Destruction of St. Josmane's Hope 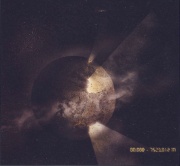 The Imperial counter-offensive to reconquer St. Josmane's Hope succeeded only in liberating parts of the world.[1]

During a meeting of representatives of all major Imperial fighting forces in the sector, Lord Castellan Ursarkar E. Creed commissioned the destruction of the planet. With options such as Exterminatus and nova cannon bombardment unavailable, the only way left was to send a small special force to trigger tectonic instabilities by overloading the generatorium grid in the main prison complex.[1][4b]

Members of various Imperial forces were grouped together into "Strike Force Herald". They penetrated the heart of the beset world and successfully caused St. Josmane's Hope to disintegrate. However, all of its members were lost during the planet's destruction.[4b]

The Eye of Terror Campaign

St. Josmane's Hope was one of the numerous planets created by Games Workshop as a theatre of war for their global Eye of Terror campaign. Originally it was not scheduled for destruction. Andy Chambers elaborated the reasons behind the decision in White Dwarf 287 (UK):

"On our internal Eye of Terror web group we contemplated the situation. From a background perspective we felt the Imperium would sacrifice the planet rather than lose it to the forces of Disorder, it would also mark the victory of the Chaos players so that come what may they had made a milestone mark (unplanned as it was) in the narrative of the Eye of Terror campaign. So it was one Friday night that I gave the order to destroy St Josmane's Hope, a fictional world in a giant fictional game with no actual pieces. It was a weird feeling."[3]