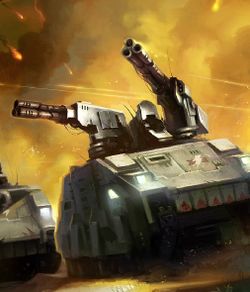 The Stalker is a Space Marine air defense vehicle.

The Stalker consists of a Icarus Stormcannon Array mounted on a Rhino chassis. Its design is based on the Hunter STC that was unearthed only a few millennium ago.[3] A vital part of the Space Marine armoury, Stalker's are rapid-firing anti-aircraft platforms able to track and engage multiple targets simultaneously. Unsubtle but devastating, they fill the sky with hundreds of rounds of ammunition. The front of the vehicle has been reinforced to deflect incoming fire, while the flanks have been enhanced with additional armour and hydraulic stabilizers to anchor it to the ground when it fires its anti-aircraft artillery.[1][2]

The secret to the Stalker's success lies not in its weaponry but that of its tracking system, which is able to accurately engage fast moving aerial targets. The system itself is made up of altered brains and neural interfaces from Servitor operators. The servitors must be specially chosen, their brains possessed of a mental agility in life that is then re-purposed in near-death. These withered gunners are often chosen from failed Chapter initiates should they be too damaged to become Serfs, either those crippled during their training or that have rejected the sacred implanting processes. Chapter serfs can also find a place as a target-servitor, if they show promise and serve well, earning the right to accompany the Chapter into war. In both cases, the brain, and as much of the head and torso of the initiate as possible, will be salvaged so that he might serve the Chapter in another way. Where possible, the servitor’s limbs are used to operate controls and weapons, but most importantly their brain is linked into the augur arrays of the cannons. The process is not always successful and many servitors may die before one merges with the tank’s machine spirit, creating a deadly symbiotic relationship.[4]