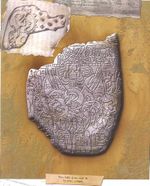 The Star Child is a mysterious entity said to represent the soul of the Emperor of Mankind. It is also known as the Numen[4], and the Chaos Child.[Needs Citation]

Over the millennia since the Emperor's internment upon the Golden Throne, the link between his body and soul has become increasingly tenuous. As the Emperor's spirit drifts through the warp, much of its energies have been dissolved, except for a tiny core that remained whole. So long as this portion of the Emperor's soul survived, there remained hope for humanity, for just as the New Man was born of the collective souls of the Shamans, so too may the Emperor's soul be reborn one day. This potential was merely a child awaiting birth, the Star Child. The Star Child also represents the human portion of the warp.[2a]

The Star Child is also suggested (by a fragment of the Emperor's mind) as being the compassion which the Emperor cast from himself in order to destroy his most beloved Primarch-son, Horus.[3b] Inquisitor Jaq Draco believed that Shining Path upon which the Numen may be born originates within a special node of the Webway, known as Uigebealach, where time flows backwards. He believed that by visiting this special crossroads, and achieving a triumph by resurrecting a lost soul, he may accelerate the birth of the Numen.[5c]. However, upon his death, he had instead achieved Apotheosis, becoming a tiny part of the Numen as a diffuse hydrogen atom in the void will one day condense into a star.[5d]

The Star Child and the Sensei

The powers can range from extra protection, daemon-slaying abilities, sword mastery, and marksmanship amongst other gifts. These gifts may likewise permeate other members of a Sensei's adventurer band.[2d] When the Star Child recognizes the deeds of a Sensei, they will be drawn into the warp to commune with the Star Child, where he may achieve Apotheosis and become a Sensei Master, which is analogous to a Daemon Prince.[2d]

In 997.M41, Inquisitor Fortez reported that he and his colleagues Alexio and Credo had discovered a cult known as the Cult of the Star Child, led by self-proclaimed Sensei claiming to be the Emperor's sons. However, Inquisitor Fortez rejected the notion that they are the Emperor's sons on the basis of their affiliation with abhumans and Eldar. The Inquisitor instead suspected it may be a Tzeentchian cult, with the Architect of Fate masquerading as the Star Child. The cult and all but four Sensei were killed.[6]

The Star Child and the Illuminati

One legend states that once the Emperor dies, his soul will be freed to go into the warp. Here it will neutralize the Chaos Gods, causing the physical universe to fight one last bloody conflict against itself for the control of the galaxy.[8]

Due to the Psychic Awakening, the legend of the Star Child seems to have been rekindled. A few years into the Indomitus Crusade, visions of a golden infant interspersed with flashes of a radiant being rising from a throne of light began to be reported across Astropathic relay networks, beginning in Segmentum Solar. Over time the images became clearer, and many began to interpret this with the legend of the Star Child. These visions caused great upheaval in the Imperium, leading many to investigate the truth of the matter. Others, including servants of Chaos such as Kor Phaeron and Tenebrus, seek to stop the awakening of the Star Child.[9]