The Star Phantoms are a loyalist Space Marine Chapter who played a pivotal part in the Badab War.[2a]

The Star Phantoms are a Chapter whose many victories remain unsung because of its own penchant for secrecy and isolationism. As part of the Sentinel Founding early in the 38th Millennium, the Chapter was founded to shore up the defenses of the Imperium in many vulnerable parts of its vast domain. Initially based in the Mausoleum world of Haakoneth, the Chapter became fleet-based by necessity upon the destruction of the planet in 120.M40, and since that time had been grimly plying the space lanes of Segmentum Obscurus. The Chapter was counted as one of those who participated in the Macharian Crusade, but after the death of Solar Macharius participated in the Imperial civil war known as the Macharian Heresy. The Star Phantoms were said to have been subsequently responsible for the annihilation of the 17th Terrax Guard on Thoth, and the near destruction of their former allies, the Marines Malevolent. Ultimately, the Chapter was cleared of heresy by the Inquisition.[2h]

The Chapter arrived in strength in the Maelstrom Zone in 912.M41, mostly due to the intervention of Legate-Inquisitor Frain and his acolytes, and pledged all of its ten Companies to the Loyalist cause[d]. The Chapter's fleet, led by the battle barge Memento Mori, played a pivotal part in the destruction of the infamous Ring of Steel star fort network surrounding the Badab system.[2a]

When the final attack on Badab Primaris came, the Star Phantoms were given the glory of leading the first wave of attackers. Two of its companies supported the marines of the Fire Hawks and Sons of Medusa in taking the High Guard orbital fortress, while its remaining forces, some seven companies strong, would join the heavy assault elements of the other participating Loyalist Chapters as well as Inquisitorial Storm Troopers in besieging the seat of the Tyrant's power: the Palace of Thorns itself.[2b]

Almost two hundred battle-brothers of the Chapter died in the opening assault alone, but that was only a prelude to the carnage that was to come. What followed was a deadly meat grinder of battle, as defender and attacker desperately sought to gain the upper hand in a torn cityscape that had been turned into a veritable death trap. Events soon tipped in the Loyalists' favor, but against all logic the Palace of Thorns remained unbreached, even with the participation of the Titans of Legio Crucius.[2c]

The second day of the siege fared much better, as the lightning field that had surrounded the stronghold suddenly flickered and died, an indirect result of the sabotage of countless hive reactors by the Carcharodons. Although the field eventually came back up, the short period it was down was enough for the Star Phantoms assault forces, led by Captain Zhrukal Androcles, to force their way into the fortress. It was in this final assault that, through a quirk of fate, Captain Androcles and his squad encountered Lufgt Huron and his honour guard in the lower catacombs of the palace. The two forces met in mutual annihilation, but while Androcles fell in the battle, he was able to apparently deal a mortal blow to the Tyrant, care of a point-blank blast from the dying Captain's combi-melta.[2d]

In recognition for their service the Star Phantoms were given dominion over the shattered remains of the Badab sector. Being fleet-based for so long, the Chapter accepted this as if it was a reward long in the coming. Taking its pick of the planets, it settled on the ice moon of Jahga, where they chose to bring down the heavily-damaged Memento Mori, and use the ancient warship as the base of their new Fortress-Monastery.[2e]

Evidence for this theory is that the symbol of the Star Phantoms closely resembled that of the Dreadwing, a Heresy-era formation of the Dark Angels Legion. 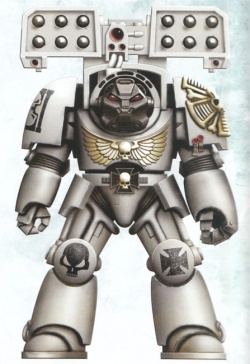 The Star Phantoms broadly conform to the standards laid down in the Codex Astartes, but have displayed a marked preference for first strike tactics, exemplified by drop pod assaults. The Chapter also seems to prefer long-ranged bombardment using heavy weaponry over the chaos of melee combat, though it is capable of the latter when it is tactically expedient to do so. For the battle-brothers of the Chapter no one mode of combat holds more glory than another; all that matters is that their enemy is disposed of[2h].

Instead of having two Devastator Squads per Battle Company as per Codex norm, the Star Phantoms instead have three. These warriors have gained a reputation for being indiscriminate in their use of the firepower at their disposal, inflicting massive collateral damage, to the point where the Lord Solar Macharius himself is said to have stated that the Chapter was "Unsuitable for tactical close support of other Imperial Units".[2h]

The Chapter's armoury maintains an abundance of Plasma and Melta-based weaponry, and indeed it is a mark of honour among the Chapter's leaders to go into battle using a combi-plasma or combi-melta wrought by the Chapter's Techmarines.[2h]

Despite their founding in M38[Needs Citation], the Star Phantoms are known to have fought alongside the Flesh Tearers in the cleansing of the Sakkara System, less than one hundred years after the end of the Horus Heresy.[3]