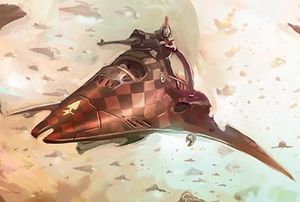 The Starweaver is a type of anti-gravity vehicle used by Eldar Harlequins.

Starweavers streak across the battlefield as a storm of shattered light, relying upon a mixture of velocity and misdirection to confound the enemy’s aim. These swift attack vehicles have a transport platform at their rear capable of bearing a Harlequin Troupe into battle.[1]

The Starweaver is named for the first and greatest son of the Cosmic Serpent. The Serpent is a significant totem to the Harlequins for he is said to have existed in both the material and psychic universes at the same time and his strange and capricious young acted as occasional allies to Cegorach. Starweaver was the most noble and courageous of this brood, and swiftly made common cause with the Laughing God.[2]

The Starweaver is armed with 2 Shuriken Cannons and 3 banks of Mirage Launchers. There is also a rappelling line that can be attached to the back of the vehicle.[1] 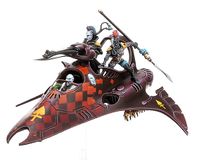