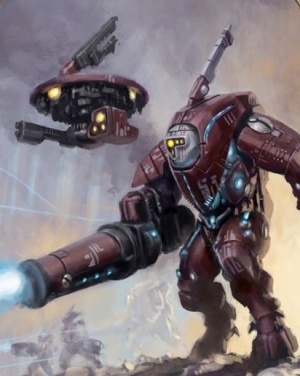 The Stealthsuit Team is the "lone wolf" of the Tau Empire's military.[1]

Equipped with either the XV15 or XV25 Stealthsuit, these teams operate independently from other military formations. In fact, they are not factored directly into Tau battle plans, and so enjoy an unusual degree of freedom within broad mission parameters, with team leaders gaining a reputation of eccentricity as they employ unorthodox tactics.[1] Operating in teams of three to six members, including the team leader, their primary role is to ambush isolated enemies and act in support of friendly units, often ranging far ahead of the main Tau army.[1]

Stealthsuit teams do sometimes play a more integral part in planning and executing a mission - i.e., when acting as part of a Rapid Insertion Force.[2]

In addition to their jetpack-equipped Stealth armour, each member is armed with a burst cannon, and all may take one Battlesuit support system. Members may also replace their burst cannon with a Fusion Blaster, though no more than two are allowed in a full six-member team. The team leader may also take an additional item of wargear and, if he is of Shas'vre rank, be equipped with a Markerlight.[1]