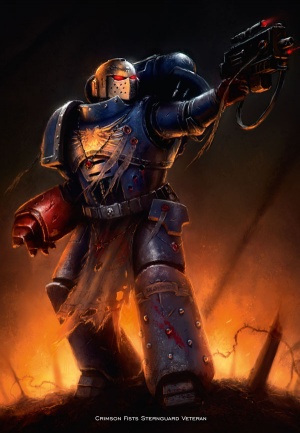 Sternguard Squads deploy wherever the battleline is most fierce, facing down the most impossible odds with icy calm and precise bursts of bolter fire. They are the image of what every Space Marine aspires to become, and the pinnacle of any Chapter's fighting force.[1] Though there is friendly rivalry with their counterpart Vanguard Veterans, such competition does not get in the way of their bonds in battle, and each will fight to the death for the other.[2]

All Sternguard Veterans are equipped with extra kinds of specialised ammunition for use in battle.[2] In addition to standard Bolter rounds they have access to: