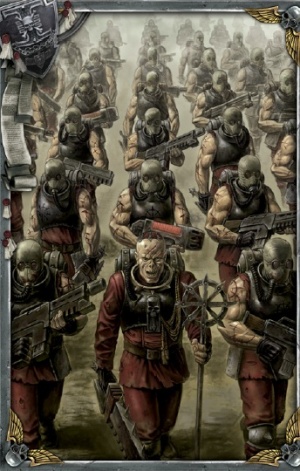 The Stigmartus are a Chaos Cult and warband operating in the Jericho Reach region and were key combatants against the Imperium in the Achilus Crusade. Consisting of renegades, madmen, criminals, cultists, mutants, and rogue psykers[2], the Stigmartus are named for the ritual branding of their flesh with the sigil of their masters. Although they are brutal and frenzied to the extreme, like the Blood Pact they maintain harsh discipline and military-style professionalism, being organized closely along the lines of an Imperial Guard Regiment. The commanders of the Cult are believed to be the remainder of the previous heretic rulers of Khazant, which fell early in the Achilus Crusade. Now they are bound by the charismatic leadership of a cult-general known as Elak Sarda, said to be sworn to a daemonic entity within the Charon Stars.[1]