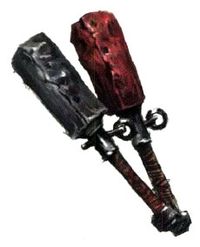 The Stikkbomb is a type of Ork weapon[1].

Stikkbombs are Ork grenades in the form of a stick with the explosive part at the top and the pin at the bottom. The stick handle is very useful, allowing the grenade to be easily carried stuffed down a boot or through a belt. The main reason for the popularity of the design is its brutal appearance and appropriate sense of size and power. Two words best describe them - big and loud. Orks are known to use them as improvised clubs in close combat, often to lethal effect.[1][3][4][5]