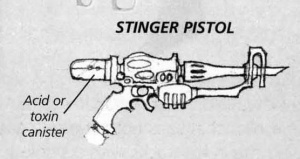 The Stinger is a Dark Eldar weapon used primarily by Haemonculi[1].

This weapon resembles a smaller, more rounded Splinter Pistol, although the similarities end there. The Stinger, instead, fires small hypodermic needles at the target, the cavity of which contain an incredibly exotic bacteria. This bacteria, once introduced to the target's bloodstream, multiplies quickly, and shortly afterwards causes the victim to literally explode, sending fragments of bone and armor flying in all directions. In the event that the victim's comrades are close enough or unlucky enough to have one of these fragments lodged in their bodies, the bacteria will travel from the lodged debris into the comrade's bloodstream, multiplying and ultimately causing them to explode.[1]