The Storm Giants are a Space Marine Chapter. 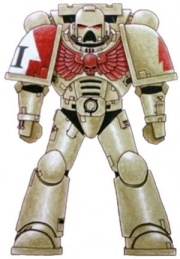 The Storm Giants have fought in several of the Imperium's greatest and most pivotal wars, not least among them the Third War for Armageddon. They display high physical strength even for the standards of Space Marines, and there is some debate that their Gene-seed may have mutated to enhance their Biscopea. Several Magos Genetors have made requests to study the Chapter's gene-seed but they have refused one each occasion.[6]

Storm Giants do not display their company colours.[6]