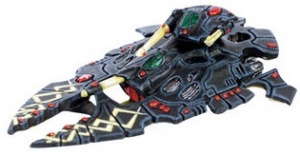 Storm Serpent of the Craftworld Eldar

The Storm Serpent is a Engine of Vaul, a super-heavy grav-tank of the Eldar. While other Engines of Vaul are noted for their immense firepower, the Storm Serpent actually contains a mobile Webway portal, which it can use to disgorge warriors right into the enemy's midst.[1]

While the Storm Serpent superficially appears like a sleek gunship, its hull seemingly too small to carry any troops, the secret behind its function lies within the Wraithgate generator it carries. Using the same vast energies other Engines use to power their immense weaponry, the Storm Serpent is able to create a shimmering portal amidst the craft's attuned promontories which links directly to the Webway. This mobile portal can be accessed by the Eldar from anywhere, whether an orbiting fleet or Craftworld, for the rapid deployment of troops. The one limitation of the Storm Serpent's Wraithgate is that it can accommodate vehicles no larger than a Vyper. The Storm Serpent itself only mounts a Pulse Laser and Scatter Laser for offensive firepower.[1]

Storm Serpents were first sighted by Imperial forces during the Crucien War of M36, where they were initially mistaken for just another gunship. When three of these craft approached Merloc's Point and suddenly disgorged dozens of Aspect Warriors, overrunning the Imperial Guard's position, a new strategy was adopted to target Storm Serpents first in order to kill what they believed to be their onboard passengers. In the subsequent fighting several Storm Serpents were successfully destroyed but for no apparent gain as the Eldar host hardly seemed diminished. It was only on the single single occasion they could recover one of the wrecked vehicles the Imperials discovered less than a dozen bodies and realized the Storm Serpent's true nature.[1]