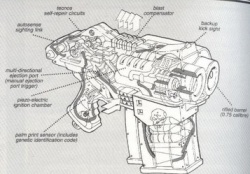 The Storm Bolter is a compact, double-barreled version of the Boltgun. Resembling two boltguns attached side by side, the storm bolter is capable of withering fire without hindering maneuverability, granting the wielder enormous individual firepower. Storm bolters are popular with Space Marine forces, specifically in the hands of Terminators and as infantry defense on Rhinos.[Needs Citation]

Outside of the Space Marines and Adepta Sororitas, storm bolters are utilized by few elite Imperial forces.[2]

Storm bolters are often adorned with glyphs and purity seals that point out their ancient origin.[1]

The Incaladion pattern storm bolter is known to have been used by Carcharodons Terminators during the Badab War.[4d]

The MKIII pattern storm bolter is known to have been used by the Astral Claws during the Badab War.[5]

The Salamanders are known to have used Nocturne-Ultima modified storm bolters during the Badab War.[4b]

The Ryza-pattern Storm bolter is almost exclusively used by the Adeptus Astartes.[6]

The Umbra pattern storm bolter is known to be used by Terminators of the Red Scorpions. With the dual magazines pictured below their ammunition capacity is forty rounds.[3]

The Sons of Medusa are known to have used Ultima patternstorm bolters for their Terminators during the Badab War.[4c]

Other Boltguns used by Imperial or human factions and organisations

Used by the Adeptus Custodes. This pattern of bolt weapons is named for the weaponsmiths of the Lastrum Core Clan of the Appolyne workshops of Terra. Other than being exemplars of their kind in terms of skill of fabrication, they would not be remarkable save for their uniquely powerful ammunition. Rather than the usual 'kraken' type bolts utilized by the wider sweep of the Legio Custodes, the artisans of the Lastrum clans hand manufacture only customised mass-reactive heliothermic warheads for their bolt shells. Once within their target, these burst into brief, but sun-hot incendiary detonations, incinerating their victims from within. These shells are uncommonly dense, requiring a far stronger charge to launch than common bolt shells, and only the Lastrum's uniquely sturdy construction for a weapon of their size can withstand the stresses of their repeated firing.[8]

The sheer resources and artifice of these weapons are immense, and they could never hope to be mass produced to arm the Space Marine Legions, and even the output of entire generations of the Lastrum themselves can barely satisfy Legio Custodes' demands.[8]

Due to the fact that in most cases specific storm bolter images are not labelled, unnamed designs are collected here, grouped by outward similarity.[Needs Citation]