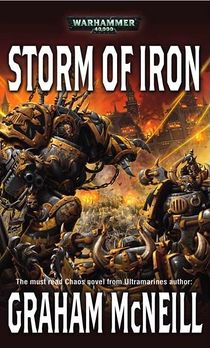 Cover art for the 2008 edition by Andrea Uderzo.

Storm of Iron is a Warhammer 40,000 novel by Graham McNeill It was first published in 2002 as an official product of the Eye of Terror worldwide campaign. It was reprinted in 2007. A new edition with new cover and afterword was released in April 2008.

On the nightmare battlefields of the Warhammer 40,000 universe, few foes spark more fear and dread than the Chaos Space Marines. Nurturing a hatred that is millennia-old, they attack without mercy, spreading terror and destruction in their wake. Now hell has come to Hydra Cordatus, for a massive force of terrifying Iron Warriors. brutal assault troops of Chaos, have invaded the planet and lain siege to its mighty Imperial citadel. But what prize could possibly be worth so much savage bloodshed and destruction and how long can the defenders possibly hold out?