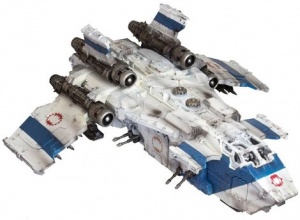 The Stormbird dropship was an assault and transport aircraft used by the Space Marine Legions during the Great Crusade (and in some cases - even before it begins), before the introduction of the smaller Thunderhawk pattern.[1]

The Stormbird was developed to replace the older Skylance gunships of the Unification Wars.[7] Capable of both void and atmospheric flight, the Stormbird was first manufactured on Terra, by the Yndonesic Bloc for use against the Panpacific tribes, during the end stages of the Unification Wars. The Stormbird could carry at least 50 fully armored marines into battles.[1][4] Alternatively it could carry up to 5 Dreadnoughts, including the mighty Leviathan; Jump-pack equipped infantry; Rapier batteries; bikes; jetbikes; a Rhino armoured transport; or a mixed force. The Stormbird’s standard armament was four turret-mounted twin linked lascannons, three twin-linked heavy bolters, and a complement of six dreadstrike missiles. It was also equipped with particularly dense composite armour plating, and is further protected by a series of void shield generators which it can extend to protect disembarking troops and war machines. Its shields allowed it to be impervious to all ground fire save Defense Lasers.[8]

They were in use throughout the Great Crusade, although by the time of the Horus Heresy, most of the Legions had switched to the smaller, more agile Thunderhawk. The Luna Wolves were one of the few Legions that deliberately kept Stormbirds in service, since these ships had carried them into battle since the beginning[1]. A Stormbird was piloted by two Marines sitting back-to-back, along with two hard-wired servitors[1]. During the Heresy, Nathaniel Garro, former Captain of the Death Guard Legion, used a Stormbird to travel to various planets, on the orders of Malcador the Sigillite. Like Garro's Power Armour, the ship bore no Legion insignia or colours, and was a uniform grey[2][3].

All but a legend by the final years of the 41st Millennium, no new examples of the Stormbird have been constructed in almost a millennia, for much of the technology that allows such a behemoth to function is no longer understood.[8] However some aging Stormbirds are still utilized by some Chaos Space Marine forces such as the Word Bearers.[5]

The Sokar Pattern Stormbird, known as the Death Bird to the Imperial Army was a dedicated landing craft variant of the Stormbird, developed from Warhawk and Nephoros class assault craft. It was used by the Yndonesic Bloc during the Unification Wars and later adopted by the Imperium. The design was one of the larger craft used by the Imperium and was the direct precursor to the Thunderhawk.[6] 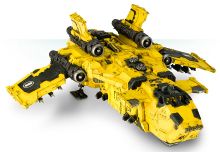