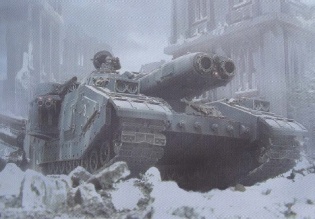 The Stormblade is a variant of the Shadowsword, a super-heavy vehicle used by the Imperial Guard as a Titan-hunter. Developed by Ryza, a Forge World noted for its mastery of plasma weaponry, the Stormblade represents a viable alternative for those Forge Worlds which lack the STC data necessary to construct a Shadowsword.[1a]

The Stormblade is built upon the same chassis as the Shadowsword but lacks some of the advanced features of the original design, primarily the long-range tracking device and redundant generators and capacitors to power the Volcano Cannon. In its place it mounts a Ryza-pattern[2b] Plasma Blastgun, a powerful if short-ranged weapon capable of destroying Titans and other super-heavy vehicles, powered by massive photonic fuel cells. Additional space left over is used for extra heat shielding to protect the crew and an extensive cooling system to make it more reliable than the Leman Russ Executioner. To compensate for the loss in long-range firepower both sponson turrets are fitted with Lascannons with a fire control system adapted from the Baneblade, while the sponson mounts themselves are fitted with twin-linked Heavy Bolters and a coaxial Heavy Bolter is also included. A Targeter just above the primary weapon and an off-set armoured housing for a Searchlight are standard.[1a][2a]

It was once common practice for Stormblades to mount racks of Hellion Missiles to assist them in bringing down the heaviest of Titans, however, after three Stormblades of the Phyressian 31st Heavy Tank Company were destroyed by their own missiles, the weapons were withdrawn from service.[1a] Some Stormblades will mount a Hunter-Killer Missile and/or a pintle-mounted support weapon, either a Heavy Stubber or Storm Bolter. Others still will replace the sponson mounts for additional armor.[2a] 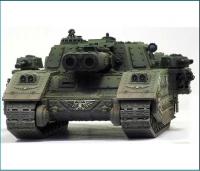 During the Great Crusade and Horus Heresy Stormblades were used by super-heavy detachments of the Space Marine Legions.[7]