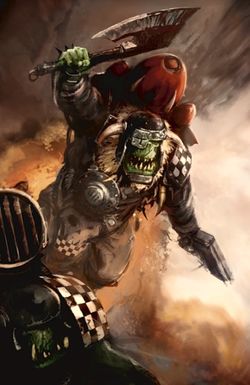 Stormboyz are Orks that fancy discipline and, equipped with Rokkit Packs, fulfil the role of jump infantry on the battlefield.

Ork Stormboyz are the equivalent of greenskin shock troops. They have discipline above that of the average Ork and are more efficient too. Commonly viewed as being nutcases amongst regular Orks since they go into battle with fuel-filled rockets strapped to their backs. Orks usually distrust anything that flies and prefer to go to battle on their own two legs, but Stormboyz love nothing more than joining battle quickly, part of the reason they strap rockets to their backs.[1]

Most Stormboyz are usually younger Orks who for various, inexplicable reasons, have grown tired of the normally anarchic lifestyle among the regular Ork boyz. Tired of being told that they can do whatever they want they seek the way to rebel against typical Ork lifestyle. Longing for discipline, these youths often run off to join a Stormboyz camp. This is particularly typical of the youths of the Goffs and Blood Axe clans.[1]

While at these camps the young Orks are drilled in marching and hurtling through the air, a regimental lifestyle that these Orks can become easily addicted to. It may be due to their chosen lifestyle that Ork Stormboyz have an actual respect for authority rare in Ork Kultur. Unlike most Orks, Stormboyz also take planning and forethought very seriously. Such information as strength and location of the foe are used by the Stormboyz to determine how best to orchestrate their attack.[1]

Other Orks usually view all this parading, boot-polishing and voluntary obedience with amusement or even contempt, but despite their strange ways, the Stormboyz are a serious force on a battlefield. Always eager to show their prowess by putting their battle-drill into practice they use their Rokkit Packs to strike at vulnerable targets, predetirmined by a kunning plan. Stormboys are invaluable when assaulting bastions and defence lines as all Orks understand. As other Orks, Stormboyz fight in mobs, often lead by a Nob.[1]

An example of a famous, or rather in this case, infamous Stormboy is Boss Zagstruk, the ruthless leader of a band of Stormboyz known as Vulcha Squad. His reputation for being a merciless killer and a fanatical disciplinarian is the very manifestation of the Stormboyz doctrine.[1]

In battle Stormboyz make heavy use of Rokkit Packs, that allow them to jump high into the air. Typical Stormboy also carries Slugga, Choppa and a number of Stikkbombs.[1]