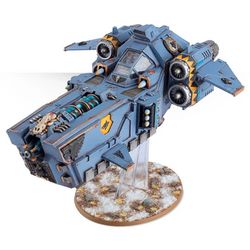 The Stormfang is a type of specialized Gunship used by the Space Wolves.[1]

For the Space Wolves, the Stormfang Gunship is the final word in aerial superiority. Designed to dominate the skies in the manner of the dread ice wyrms of Fenris, a Stormfang’s ferocious armament mirrors the fighting qualities of the Space Wolves themselves. A Helfrost Destructor runs along the length of each of these deadly attack craft – a formidable weapon designed to freeze the target area to absolute zero in an instant. Even notoriously unyielding materials such as ceramite, ferrocrete or the wraithbone of the Eldar cannot hope to withstand the thermal shock of plummeting to such base temperatures, and shatter beneath the lance beam’s icy touch. Most Stormfang pilots are boastful of the deadly firepower at their command, and mark their craft with tallies of their fallen foes.[1]

In addition to the Helfrost Destructor, the Stormfang is armed with sponson-mounted twin-linked Heavy Bolters, Skyhammer Missiles, or Multi-Meltas and hull-mounted Stormstrike Missiles or twin-linked Lascannons.[1]