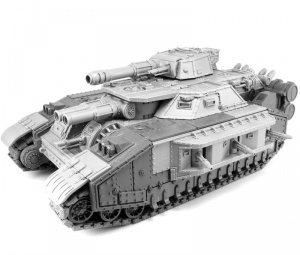 The Stormhammer is an Imperial Guard Super heavy tank.

The Stormhammer is constructed by Forge Worlds of the Adeptus Mechanicus. The massive vehicle is armed with a massive array of weaponry configured to serve at the vanguard of an expedition into areas considered hostile because of both enemy forces and environmental factors. Due to their survival and exploration systems they can tread the surface of worlds with skies of acid, seas of lava, and toxic winds. In battle, the tank was likened to a Destroyer of the Imperial Navy, for it is capable of extended independent operations as well as holding a key part in a coordinated battle plan. The Stormhammer could also act as a command vehicle with the proper upgrades.[4]

During the Great Crusade and Horus Heresy, the Stormhammer was the preeminent super-heavy tank of the Solar Auxilia, often used as the vanguard of the Imperium's invasion and pacification forces.[2] During this time, the cohorts of the Solar Auxilia could field entire Companies of the vehicles.[3] 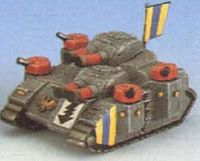