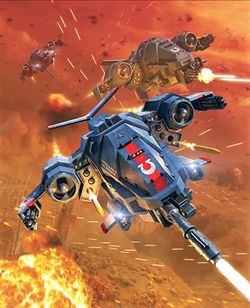 Stormhawk Interceptors are specialized gunships closely related to the Stormtalon pattern that excels in aerial superiority. The frontal armour and huge firepower makes of the Stormhawk makes them excellent dogfighters, hurtling through the clouds to execute target after target in a blazing display of incendiary defiance. Stormhawk squadrons and their golden haloes of flares discharged to gently dissuade incoming fire are a signal that whatever planet the skies are over, they belong to the Emperor.[1] Stormhawks are also capable of operating in the void of space as Attack Craft.[2] 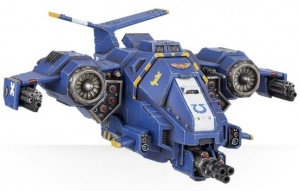 Stormhawk Interceptor of the Ultramarines