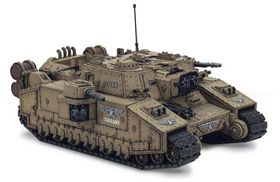 The Stormlord is a rarer variant of the Baneblade super-heavy vehicle used by the Imperial Guard. Unlike the more common Shadowsword variant, it is not designed to hunt Titans but instead geared towards the destruction of infantry.

The Stormlord's primary armament is a Vulcan Mega-Bolter, which can dispatch enemy infantry with a vicious hail of fire. Although it may lack the heavier guns on its brethren, the Shadowsword or the Stormsword it is normally deployed alongside the Titan Hunters as "pest control". Its massive amount of anti-infantry firepower is the bane of light troops everywhere, but its most widely regarded ability is troop transport, which its older counterparts are not equipped for.

The Stormlord is able to redirect the power normally supplied to the engine to double the Vulcan Mega-Bolter's rate of fire.[1] Guardsmen often refer to the Stormlord as a "safehouse", due to the security of being inside one.[3]