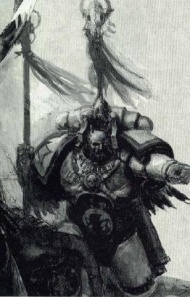 The Stormseers (zadyin arga[Needs Citation]) of the White Scars are the equivalent of the Librarians of other Space Marine Chapters.

While the Stormseers of the White Scars function as typical Librarians, their traditions are deeply tied to the original Stormeers of Chogoris, tribal holy men who rode the plains with the Primarch Jaghatai Khan. It was those Stormseers who, along with various tribal leaders, named Jaghatai Khan the Great Khan, Ruler of All Within the Lands, after his decisive victory against the Palatine forces. Like Rune Priests of the Space Wolves, Stormseers use the natural powers of Chogoris as the source of their power and this serves as a limiting intermediary to protect them from the malign influences of the Warp.[4]

Stormseers are still called upon to name new members and leaders of the White Scars. Every ten summers, the Stormseers observe the tribal warriors native to their Homeworld, and choose only the most worthy to become Space Marines. When a Great Khan is lost in battle, it is the Stormseers who will decide his successor. They retreat to the caves of the Khum Katra mountains, where Brotherhood Khans will present themselves to be tested by the great seers. It is unknown precisely what process the Stormseers use to prove a new Great Khan, but few candidates survive the process, and those that do never speak of the trials they endured.

Part of the responsibility of a Stormseer is to uphold and teach the core beliefs of the White Scars. They believe it is the duty of the Chapter to destroy the enemies of the Emperor, awaiting the day that he will rise again, signalling the return of Jaghatai Khan, and the beginning of the next Great Crusade to unify all of humanity.

Lightning is a powerful symbol for the White Scars, representing both their combat style and prowess, but also the psychic power of the Stormseers. They believe that their powers are connected to the spirits of the land and the air, and that as long as these natural forces fight alongside them, the White Scars will always be victorious. These elemental beliefs and the highly stylized Force Staff used by Stormseers tie these warrior-mystics to their shamanistic past on the steppes of Mundus Planus.[1]