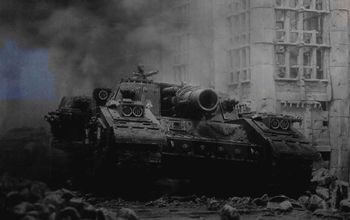 The Stormsword is an Imperial Guard super-heavy vehicle based on the Shadowsword. Built specifically for sieges and street-fighting, the Stormsword is geared towards providing troops close-quarter support with a variety of heavy weapons.[1][2a]

The Stormsword was originally a field conversion of salvaged Shadowsword chassis created during the siege of Coldarkh Hive[7]; though such "unofficial" conversions are frowned upon by the conservative elements of the Adeptus Mechanicus, most Guard commanders take a more pragmatic view.[2a] In place of the Shadowsword's Volcano cannon is a large Stormsword Siege Cannon[6] firing rocket-propelled siege shells.[1] While sufficiently powerful to level an entire building with a single shot, typically by destroying the ground floor and collapsing the structure, the weapon's limited range and restricted elevation severely limits its utility on the open battlefield.[2a]

The Stormsword's formidable secondary armaments are also geared towards the close confines of a street brawl: a coaxial Heavy Bolter is supported by two sponson-mounted twin-linked Heavy Bolters atop which are turret-mounted Heavy Flamers.[2a] Although, some Stormswords replace their sponsons with extra armour plating. The Stormsword can also mount additional weapons such as a Hunter-Killer Missile and/or a pintle-mounted Heavy Stubber/Storm Bolter.[1]

While it remains a rare vehicle, the Stormsword has earned its place within the Imperial Guard, leading the charge in the heart of intense city battles, and it is rumoured some Forge Worlds have begun producing them in limited numbers.[2a]

Known Stormswords and Regiment that include them

Forgeworld released an Arkurian pattern Stormsword in 2008 and they also produce an Epic scale version, which Games Workshop does not supply.