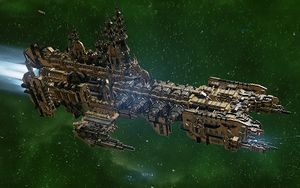 Most Space Marine Chapters control only two or three mighty Battle Barges[1a] however these behemoths are called upon rarely. The Chapter's Strike Cruisers are more common although still rare compared to Imperial Navy ship classes but the arrival of a single Strike Cruiser is usually enough to quell a rebellious planet, the same cannot be said of an Imperial Navy Cruiser.

Strike Cruisers can carry up to one full company of Space Marines and their equipment. They are primarily used for rapid deployment and are often the first arrive in orbit of a threatened planet and capable of deploying their cargo within twenty minutes of said arrival.[1b]

The armament of a Strike Cruiser is comparable to that of a Imperial Navy Dauntless Light Cruiser, equipped with two Weapons Batteries. However, the Strike Cruiser omits the lance weaponry in exchange for a mighty Bombardment Cannon.[1b] Strike Cruisers can also be equipped with Exterminatus-class weapons[27] or a Nova Cannon.[29]

Additionally a Strike Cruiser has a flight deck for launching two squadrons of Thunderhawk Gunships.[1b]