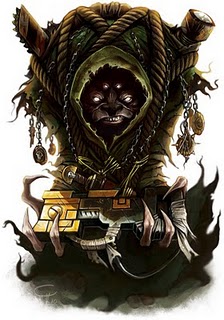 The Stryxis are a race of wandering xenos traders that many consider to be untrustworthy. They established a permanent presence in the asteroids and system on the edge of the God-Emperor's Scourge storm, in the Koronus Expanse[1], though most roam the region as nomadic tribes in fleets of barely space-worthy ships trading anything they feel to be of interest.[2]

None truly know the origins of this species that have a reputation for being wanderers, traders, merchants and keepers of secrets. Their scattered nomadic tribes roam as bands throughout the region of the Koronus Expanse where they make their way through the stars in order to trade with all those they encounter. The Stryxis have since developed a reputation for being untrustworthy scoundrels but despite this there are many who still deal with them, should they manage to overcome their aversion to the Stryxis's hideous appearance. The only known home of these xenos is their ramshackle, barely-operable caravans of voidships. It is widely known that these xenos take any remotely space-worthy vessel that they can find, whereupon they convert it into a viable vessel for their needs.[2] Encounters with the Stryxis are infrequent in the region of the Koronus Expanse though they still maintain a dark reputation. Stryxis are known to hold contacts that span the Koronus Expanse and even beyond its boundaries. Despite their reputation, Rogue Traders that do not mind speaking with the xenos race engage Stryxis Caravans, due to the opportunities for commerce and profit. In addition, they serve as treasure troves of information, legends and secrets for Rogue Traders if they have the wit to separate the truth from the lies.[3]

In terms of appearance, the Stryxis appear truly hideous to human eyes: described as resembling a human-sized, skinned dog embryo, with gangling stature and bony talons on the digits of their limbs.[2] Typically, they wear swathes of ragged bone-coloured cloth, adorned with trinkets.[3] An oddity amongst their kind is that there does not appear to be any gender variation and their young have not been encountered by outsiders. As such, outsiders do not know how these xenos breed and the Stryxis themselves tend to avoid discussing this topic. Their pugnacious faces have an upturned nose that is faintly reminiscent of Terran bulldogs with four small, beady eyes.[2]

The Stryxis are a nomadic and sparse race, sometimes known to engage in slaving and piracy.[3] Their system of government is so complex that it is incomprehensible to humanity, or perhaps systems of law or government are non-existent in their society. Regardless, betrayal and double-dealing are the norm amongst their people, whether in dealings with others or each other. They often buy or sell whatever strikes their fancy but also deal in slaves, soldiers and vat-grown labour that they call "meat".[2]

Their caravans have relatively few adult Stryxis; the majority of the ships' crews consist of slaves, acquisitions, mercenaries and their gene-engineered servant creatures. The actual adult members of the species routinely engage in politicking amongst each other and often back-stab their own kind in order to rise in rank as well as prominence. No young Stryxis have ever been seen in the caravans, and there is no discernible gender variation in the species. When questioned about any aspect of their society, Stryxis weave endless and even contradictory lies.[3]

Despite their hideous appearance, Stryxis are able to communicate easily with those humans who share the common attributes of curiosity, greed and self-interest. They delight in trade and attach great worth to valuable or rare items. For this reason, they have no interest in conquest or territory and are largely indifferent to the welfare of their own species. Ultimately, the Stryxis are driven by avarice and the need to sate their petty, duplicitous intrigues. Despite this, the Stryxis are extremely dangerous and must not be underestimated. They are skilled dissemblers, and often use their eccentric behaviour and obsession with trinkets to conceal their intellect. The Stryxis will not hesitate to betray those they deal with, should they perceive profit in the act. They will trade with anyone from humans to xenos and even the worshipers of Chaos.[3]

The one exception to this rule is the Eldar, who they will kill if they can or else avoid them altogether.[3] The Stryxis hold a bizarre, nearly irrational hatred of the Eldar that extends across their entire culture. Only the Stryxis and the Eldar know the true reason for this enmity, but neither side has shared it with outsiders.[2]

Stryxis slavers have no qualms about attacking ships or settlements for slaves. They tend to prefer to have others do the work for them and simply purchase their "meat". Their slave-pens, though crowded, are sanitary and their overseers rarely resort to lethal measures. Slaves are simply another commodity to be traded or sold, and there is no profit in letting them die or be damaged. When a slave is sold, the Stryxis give little thought to their fate and some stories speak of entire cargoes of slaves being traded to dark powers or other vile xenos for unspeakable sacrifices or perversions. In some cases, Stryxis are not hesitant in performing surgeries or behavioural modifications on their slaves to make them more valuable or suitable to the needs of their customers. Ultimately, these slave-traders are reviled and shunned in the Expanse.[2]

To those that require their services in warfare, these xenos provide slave-mercenaries who are controlled by a single Stryxis handler. Each slave is controlled either with a variety of devices, ranging from bomb-collars to excruciators, or with mental conditioning or drugs.[2]

During negotiations, the Stryxis are happy to contract out their soldiers for either limited engagements or even lengthy campaigns. After the conclusion of each "deal," they pack up any survivors and move on to the next war. These slave-mercenaries are often both desperate and brutal, since those that survive their first conflicts hope to secure their eventual release from servitude. Such freedom is rare, but the possibility makes these mercenaries utterly savage in combat. On the rare occasions when the Stryxis themselves participate in a conflict, they do not make use of slave-mercenaries but instead rely entirely on their own vat-grown warriors; if the Stryxis are going to risk themselves in combat, they prefer their soldiers to be reliable and loyal rather than cheap and abundant.[2]

It is generally thought that the Stryxis lack any form of advanced forms of technology, as these void-nomads tend to scavenge for items. However, the xenos themselves tend to cultivate this ignorance; despite their ramshackle fleets they hold sinister and complex technology. Being scavengers and hoarders, the Stryxis have a wealth of technology stolen or bartered from other races.[2]

Stryxis caravan ships are normally patchwork vessels, a mish-mash of salvaged ships or even hollowed-out asteroids fitted with engines.[3] Often the hulls of are towed in long strings, though none know how they accomplish this feat without blowing themselves into the vacuum of space. Despite their ramshackle appearance, a Stryxis ship is protected by powerful force fields and generate an interference field that defeats all but the most powerful of augurs. In addition, they are able to project ethereal beams of "ghost energy"; though these are no more effective than standard macroweapons in penetrating armour or void shields, they have a disconcerting and utterly lethal effect on the crew inside. Xenographers generally believe that, despite their mercantile practices, the Stryxis reserve their most advanced technology for their own use, rather than offering it for trade.[2]

They are noted flesh-crafters, who combine technology with genetic engineering to shape creations that are both functional yet extremely elegant. Flesh-crafters are able to grow virtually any manner of biological creatures for the Stryxis' needs. Stryxis gladly trade or sell these creations to the highest bidder and this "meat" tend to outnumber the Stryxis aboard their vessels. Notable creations include Vat-brutes, massive slabs of muscle created for a variety of tasks. These vaguely humanoid beings resemble some form of proto-human with smooth, featureless faces and androgynous features. Their intelligence is more akin to a mono-tasked servitor than a human, and they may be used for a variety of tasks, from heavy labour to combat.[2]

Stryxis tend to favour energy weapons; their ranged weaponry primarily consists of ornate, yet archaic-looking las-weapons similar to those used by the Imperium. Their melee weaponry is noted for its variety, such as Curseblades as well as the infamous Aether Weapons, which can pass through solid matter to strike the being beneath. However, these Aether blades are highly vulnerable to psychic shields and wards, making them useless against Daemons or Warp Entities. In the Imperium, such weapons are known as "ghost blades" with the Inquisition quickly apprehending those who possess one.[2]