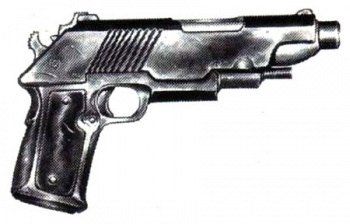 Stub guns or slug guns are a name that refers to a wide variety of low-velocity, high-calibre pistols.

They resemble 20th century revolvers or semi-automatic pistols and fire solid bullets, usually one at a time. Being amongst the easiest firearms to manufacture, they are common on Imperial worlds, where they are often called by local names, such as 'sluggers' 'smokers' or 'shooters'. These weapons are generally locally manufactured or jury-rigged from the parts of other weapons. Stub guns are commonly used by hive gangers, criminals or other citizens, feeling the need to defend themselves. Because of their availability they are often used by chaos cults. Infamous for their poor accuracy and unreliability, stub guns are not usually considered a military weapon, but, as well as Autopistols, they are sometimes used by Guardsmen as a backup weapon, especially by the ones using unreliable melta- or plasma-weaponry.[1][2][3]

This unknown pattern of stub gun displays a superior finish to most and is believed to be manufactured on the Armoury World of Vraks.[2]

This pattern is primarily used in Imperial Navy and fires fat, blunt man-stopper rounds. It holds ten rounds of ammo, spring-loaded into the slide inside the grip.[7]

This bulky and intimidating high-capacity stub pistol is a copy of the traditional Scipio pattern Naval pistol. It is a common sidearm for enforcers, household troops and mercenaries throughout the Calixis Sector and has been mass-produced for centuries under contract to arm the Magistratum cadres of Scintilla and many other worlds.[11]

The stub revolver carries fewer rounds than most pistols but is very reliable and easy to operate. As shells can be inserted individually, it is relatively easy to load in specialised rounds when needed. It is one of the most ancient of pistol designs and serves as an ideal backup weapon.[4][5]

Unlike the Stub revolver, this pistol weapon also can fire in rapid semi-automatic mode as well as single shots. Like the Autopistol it is easy to produce and maintain, but less accurate at longer ranges. Just as common as the revolver variant, the stub automatic is less reliable, but allows for a greater rate of fire and clip capacity.[4][5]

A stub gun that fires huge calibre slugs with massive recoil. These are especially popular with enforcers and bodyguards.{Fn|14}}

This type of antique weapon is used by Adeptus Mechanicus Tech-Priests and is able to hurl out a thunderous cloud of solid slugs.[12]

The stubcarbine, though small, has the stopping power of the heavy stubbers mounted on the vehicles of the Astra Militarum. When a squad of Sicarian Infiltrators opens fire with these weapons, the air fills with a avalanche of solid shot that chews their victims to shreds.[13]