The Subjugators are a Space Marine chapter.[9] They are one of 20 Space Marine chapters, known as the Astartes Praeses (they were listed in the Mythos Angelica Mortis - a tome of ancient knowledge),[9] which were created to watch over the Eye of Terror region[9] and protect the Eastern Marches from enemy invasions to Terra.[4]

The Subjugators are known to be unrelenting in the prosecution of the enemies of Mankind, attacking with overwhelming force and eschewing many of the more subtle arts of war, resulting in the destruction of enemy forces, resources and assets. Their use of extreme methods causes many Imperial Commanders to hesitate requesting for aid, because they will both purge the invading enemies and the oppressed population.[4] 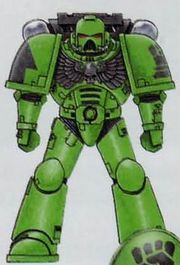 They follow a lot of the traditions of the Imperial Fists Chapter, like the veneration of Rogal Dorn, but also share a lot in common with the Black Templars, in their zeal to destroy all potential threats to the Imperium. Their duties in the Segmentum Solar and Obscurus prohibits them from undertaking the crusades like the Black Templars, but they can still contribute small forces to larger operations.[4]

The Subjugators are unusual in that they only field the Annihilator variant of the Predator.[8] They are described in one source as "idiosyncratic".[7]