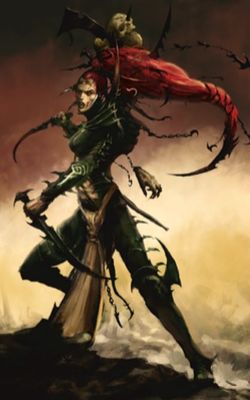 The Succubi are the ruling elite of Wych Cults. They are impossibly beatiful and elegant as they stalk through the fiercest battles like they were born to it. Each one of these ultimate killers is known across Commorragh for the grace of their skills, and each succubus is an icon of the gladiatorial arenas. Succubi are sometimes called Archites but collectively they are known as ynnitach, or brides of death.[Needs Citation]

Succubi are universally female. They have been so since the earliest days of Commorragh.[1]

Each of these talented murderesses are held in high regard in Commorragh. They are superb in what they do, killing, and there are no scars on their skin to spoil their fair beauty. Traditionally each Wych Cult is ruled by three of these Succubi. In practice, only one of them has true power over the cult, while the two others are constantly trying to outdo each other in magnificent gladiator spectacles. Unlike Archons of Dark Eldar Kabals, Succubi prefer straight decapitation when resolving their feuds, not the twist of the political knife.

These masters of close combat are not content to just oversee their gladiatorial activities. As a way to enhance their skills, outmaneuver their rivals, or just enjoy themselves, they will frequently lead raids into Realspace.[1]

Succubi are able to take whatever they want from their cult's armoury. They might be armed with wych weapons, take haywire grenades or even blast pistol to destroy enemy vehicles during raids. It is not uncommon to see one wielding a Venom Blade, agoniser or Electrocorrosive Whip. Unlike archons, succubi never wear any other armour or defensive gear than a wychsuit as they trust in their ability to dodge the most lethal attacks.[Needs Citation]