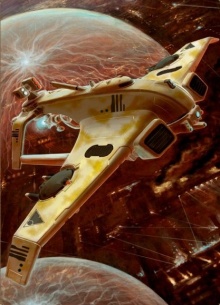 The AX39 Sun Shark[3] is a Tau atmospheric bomber aircraft.[1]

Capable of blasting ground targets with its primary armament, the Pulse Bomb Generator, secondary systems include Interceptor Drones to intercept incoming enemy aircraft and Missile Pods to both protect from aircraft and provide supporting fire. The Drones may be exchanged for additional thrusters and Quad Ion Turrets.[3] Due to their unique fighting tendencies, the Tau due not use ground artillery in a conventional sense, and thus an advanced Air Caste bomber was necessary for effective heavy fire support.[2]