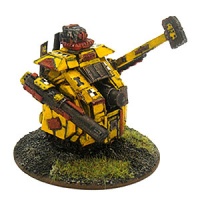 Supa-Stompas are a type of small Ork Titan.[1]

Supa-Stompa's occupy the middle ground between smaller-sized Stompa's and full-fledged Gargants. With an impressive array of weaponry that include Soopa Guns, Macrocannons, and Mega-Choppas, Supa-Stompa's are often used by Big Meks who have spare parts and scrap following the construction of a Gargant for their Warboss. Supa-Stompa's are deadly vehicles able to take on much larger vehicles than themselves, including Imperial Titans. This had led several Imperial commanders such as General Kurov to rate them as one of the deadliest weapons in the Ork arsenal.[1]