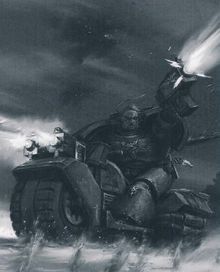 Unlike most Space Marine riders, who use their bikes for reconnaissance, the Swiftclaws' main roles are demolitions and close assault operations.[1]. Blood Claws are by nature eager for battle, and many are so intoxicated with the power and speed of a Space Marine Bike that they demand permanent assignment to a Swiftclaw Pack.[1] Swiftclaws are sometimes assigned to a dangerous mission that demands speed and daring, such as navigating a treacherous stretch of land in pursuit of a hated enemy, or to rescue a lost chapter relic ahead of a closing enemy force.[1]

With their enhanced senses, and their survival experience (standard for any native of Fenris), Swiftclaws can spend months on a long-range hunting mission, without needing resupply. On such missions they are often accompanied by Fenrisian Wolves.[1] When the time comes for them to strike, Swiftclaws have only one rule: that their objective be achieved with as much fanfare as possible. To this end, Swiftclaws can be equipped with melta bombs, krak grenades, and bolt pistols. One of their favored tactics is to set fire to their enemy's stronghold, then ride straight to the center, boltguns blazing.[1]