The Swooping Hawks are a type of Aspect Warrior, Eldar who fight according to one of the aspects of Kaela Mensha Khaine. The Swooping Hawks take their name from the wild hunting birds of Eldar mythology, who symbolize revenge and retribution. Just as the birds of legend contain the spirit of a murdered Eldar, hovering over their killers as a mark of guilt, so too do the Swooping Hawks fly across the battlefield, dealing swift death to their enemies.[1a][2a][3a] 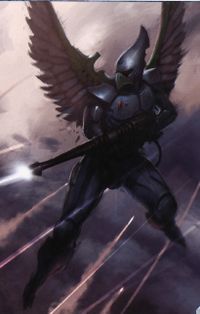 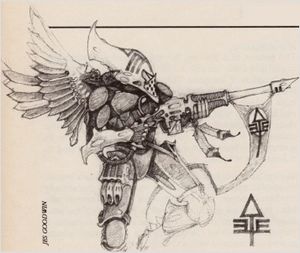 The Swooping Hawks were founded by Baharroth, the Winged Phoenix, said to be the finest student of Asurmen. Like the other Phoenix Lords he is as old as The Fall itself, but it is foretold he will die his final death during the Rhana Dandra, the last battle against Chaos.[2b] Of all the Aspect Shrines the Swooping Hawks are among the most mobile, thanks to their Swooping Hawk Wings, which allow them to lift off into the air at a moment's notice and fly across the battlefield. The speed and agility this gives the Swooping Hawks more than makes up for the fact that their Aspect Armour, compared to that worn by other Shrines, is thinner and offers less protection.[1a][3a] The armour is typically coloured like the sky, such as a pale blue or grey, with contrasting colours as well, especially on the wings.[1a]

The ritual weapons of the Swooping Hawks are the Lasblaster and Swooping Hawk Grenade Pack, two weapons especially suited to their role as harassers operating ahead of the main Eldar host. The grenade pack in particular can carry a wide variety of grenades, from Krak and Frag to Plasma and Haywire Grenades. Flying over their enemies' heads, the Swooping Hawks rain down explosive death before closing in to press the assault or falling back to cover to use their Lasblasters.[1a][3a] 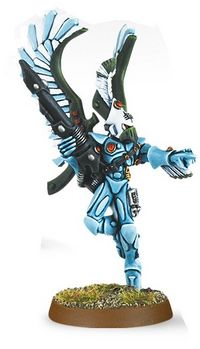 An Exarch is an Eldar warrior who has become lost upon the Path of the Warrior, trapped forever as a dealer of death and destruction. They wear more elaborate and ornate versions of Aspect Armour inhabited by the souls of past Exarchs, passing on their wisdom and forming a pool of raw psychic energy.

Those Exarchs who serve in the Shrines of the Swooping Hawks embody their Aspect to extraordinary heights and use their knowledge and skills to assist and lead their squads. Knowing the best moment to redeploy on the battlefield, the Exarch can lead his the Swooping Hawks on a skyleap high fly into the air and land in a tactically better position. Such is his skill in aerial combat, as well as those he has taught, that they can successfully combat even enemy skimmers.[3a] In addition to their normal weapons some Exarchs will arm themselves with a Power Weapon for close quarters combat, or replace his lasblaster for a Sun Rifle or Hawk's Talon.[3b] They can also be gifted with a Phoenix Plume.[5]

Shooting Stars (Rillisliddian in the Eldar language) are specially designed crafts used by Craftworld Eldar, to ferry Swooping Hawk Aspect Warriors onto a planetary battlefield. They briefly enter a planet's atmosphere where they remain undetected due to a complex cloaking system that masks them from enemy scans. Once in the atmosphere, their cargo hold of Swooping Hawks free fall to the surface, before the Shooting Stars return to their Craftworld.[4]