The Sword Class Frigate is a classic Escort ship design used by the Imperial Navy[1], Basilikon Astra[9], and at least some Space Marine Chapters.[10][11][13] 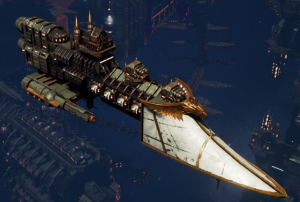 This class is a very old design, dating back to the earliest days of the Imperium. All its components have been redesigned, refined to a high level,[1] tried and tested in innumerable engagements.[2]

Its laser-based weapons batteries provide equivalent fire power to those of the less reliable plasma-based alternatives, and are able to fire to both sides, or forward with full strength. Its engines are powerful, yet simple enough to be maintained by an artificer with minimal training.[1] They are regarded as reliable even in extreme conditions.[2]

Being an escort, the Sword is expected to come under fire, and so is designed with this in mind. Its bulkheads are thicker than would be expected, and the beams and supports that hold the ship together have redundant copies nearby, that will take the load if the primary beam or support fails. Due to this, the Sword can take more punishment than would be expected for a ship of its diminutive size.[1]

Escort class ships are meant to support heavier vessels during fights and cruises. It is exceptionally rare to see an Imperial battleship without at least two, if not more, Sword class ships by its side. Sword Class Frigates are often seen fighting alongside Space Marine formations.[1] Because of their performances, they are also valued by Rogue Traders who usually convert them in order to have their merchant needs suited.[2] Pirate fleets are known to operate Sword Frigates as well.[7]

The Sword Class Frigate is known to be utilized by at least three Space Marine Chapters. These are the Mentors[10], Blood Ravens[11] and the Fulminators.[13] 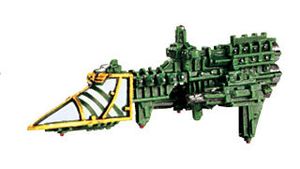