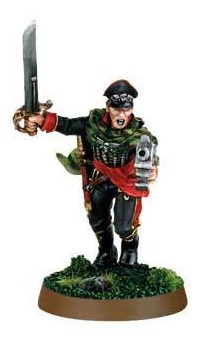 The Sword of Heironymo Sondar is a power sword, wielded by Colonel-Commissar Ibram Gaunt, commanding officer of the Tanith First and Only, during the Sabbat Worlds Crusade.

An exceptionally strong power sword, it is an heirloom of the hive city of Vervunhive on Verghast. It is said that whoever leads Vervunhive's forces in battle must wield this weapon.[1a]

During the Siege of Vervunhive, it was originally carried by Marshal Edric Croe, commander of the Vervun Primary militia, but, foreseeing his own death in combat, he gave the sword to his aide, Major Otte, to be gifted to his successor.[1b] This was Gaunt, the senior Imperial commander in Vervunhive (all of the others being either dead or imprisoned).[1a]

The sword remained in Gaunt's possession after the battle, gifted to him for his actions in leading the defence of Vervunhive. A deadly weapon, it has never left Gaunt's side.[2]

The sword, although ancient, has always proven reliable in combat and has outperformed several weapons and protective devices carried by the Chaos forces opposing Gaunt. Some of his noteworthy feats with the weapon include: