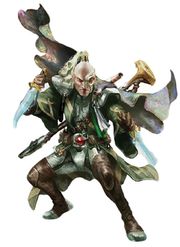 Hailing from Il-Kaithe Craftworld, Syndilian and his comrades have since journeyed into the Jericho Reach at the behest of their Farseers on a mission to turn the enemies of the Eldar upon each other in order to prevent future disaster. He has spent much of his life to this task, working unseen on worlds within the Reach to influence events, instigating battles, and assassinating key targets. He has even created alliances between enemies - all for the purpose of prolonging conflict. Most recently, he has been operating in the Orpheus Salient, meddling with the course of events and the advance of Hive Fleet Dagon. Before her death, Inquisitor Kalistradi of the Ordo Xenos had uncovered some evidence of the Eldar's presence on Avalos.[1]

Syndilian Shanyr is an extremely dangerous foe with decades of training in stealth and subterfuge. It is for this reason that only the tiniest whispers of his existence have ever reached the Imperium. The Imperium has little idea of his true mission, but have nonetheless designated him a target for the Deathwatch. He has yet to be cornered by their Kill-Teams however.[1]