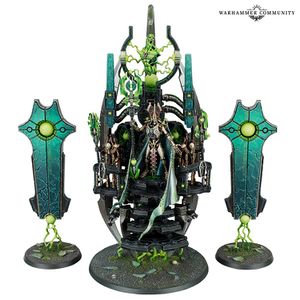 Szarekh, also known as the Silent King, is the last ruler of the Triarch of the Necrontyr and later Necron race.

Szarekh was born into the Szarekhan Dynasty, which at the time tended to have its members appointed as the Silent King.[4] At the time of his rule, the Necrontyr empire was already engaged in a vicious struggle against the Old Ones. In desperation, Szarekh agreed to form an alliance with the C'tan and transfer the Necrontyr into new bodies of living metal, becoming the Necrons. He was convinced into the agreement by The Deceiver and ignored the advice of his court adviser, Orikan.[4] However while they now lived immortal lives and were finally able to emerge victorious in the War in Heaven, Szarekh realised that his people had become soulless pawns of the C'tan and before the war even ended was determined to exact vengeance against the star gods.[1a] During biostransference Szarekh was imbued with the command matrices able to control the entire Necron race.[4]

Biding his time, Szarekh waited until the Old Ones were defeated before finally leading a Necron revolt against the C'tan, eventually defeating their former masters and shattering them into shards. However Szarekh saw that the new races created by the Old Ones such as the Eldar were now becoming dominant, and the Necrons, exhausted by aeons of war, could not stand against them. He ordered that the Necrons withdraw into their Tomb Worlds and slumber in the Great Sleep, to reawaken sixty million years in the future and assert their dominance over the galaxy once more. The Silent King, however, did not join his people in slumber. He destroyed the command protocol that allowed him control over the Necron race and journeyed into the void of intergalactic space, where he may find not only solace but also penance for dooming the Necrontyr race.[1b]

The Silent King took to the stars in a massive planet-sized sepulchral engine and set out for the void. With him went legions of his own Szarekhan Dynasty in stasis-crypts for despite his shame it was not befitting for the Silent King to travel without an entourage.[4]

For millions of years, the Silent King traveled in the void between galaxies. He was the only Necron to completely remember his past and time as an organic lifeform, suffering the memories of what he had done to his race. The aeons of grief would have destroyed the minds of any lesser lifeform. However he still had a plan, and sought to redeem himself by achieving it on behalf of his people. Szarekh sought to have his people slumber until such a time when the enemies of the Necrons such as the Eldar were overcome by internal discord and the ravages of time. Using their immortal bodies and radical weaponry, the Necrons would then lead his people to dominate the galaxy. In the meantime, Szarekh's exile in the void would achieve other ends knowable only to him, though some speculate it was to find a way to reverse Biotransference.[9]

However Szarekh eventually encountered the Tyranids and saw the threat they posed to the Necron race. If the Tyranids consumed the biomass of the galaxy, the Necrons may never be able to reverse their transformation. While his duty to defeat the Tyranids was clear, he had no desire to preserve other civilizations.[4] However the story of Szarekh's altruism to save his people from the Tyranids has gaps, as it is unclear when exactly he witnessed the Tyranids and how exactly he chanced to encounter them in the vast intergalactic void. Moreover, it is unclear from which Dynasty Szarekh eventually hailed and few memories of his rule pre-Biotransference can be recalled. Necrons who question Szarekh on these matters are taken by the Triarch Praetorians and are never seen again.[9]

In 744.M41, the Silent King ended his self-imposed exile and returned to the galaxy after encounter with the Tyranids within the intergalactic void. He discovered the Tyranids were just one of many threats facing the Necrons. Other alien races had swarmed over their Tomb Worlds and the Warp now seeped across the Galaxy.[4] He has begun a journey across the galaxy with a band of his loyal Triarch Praetorians to reawaken Tomb Worlds that still slumber so they may unite against the Tyranids.[1c] The returned Silent King was at first careful to not reveal his true identity, even to fellow Necrons. He worked primarily through Triarch Praetorians or unwitting Crypteks and Necron Overlords to achieve his goal, and has steadily influenced the galaxy from one side to the other. Slowly, he has pursued his great work from the shadows.[3] He intends to unite the Necrons against the Tyranids while also manipulating the younger races to his own schemes.[4] Szarekh has claimed that he has encountered Sanguinius, who may have been on the verge of establishing an alliance with the Necrons.[10]

When the Silent King returned openly, he bid his Triarch Praetorians and other followers return to him on the Tomb World of Antrakh. He then chose two Phaerons of minor Dynasties to form the new Triarch: Hapthatra the Radiant and Mesophet the Shadowed Hand. The two Phaerons were joined into the Dias of Dominion, itself powered by a captured shard of the C'tan Nyadra'zatha. After joining with the platform, they began to speak with the same voice and never overruled the Silent King.[9]

Szarekh was given the most sophisticated and powerful Necron body during Biotransference and maintains a sensory and neurological network far superior to anything flesh and blood could create. His physical form is built from the Necrodermis of C'tan.[9]

Szarekh goes into battle atop the Dias of Dominion which includes his fellow Triarchs Hapthatra and Mesophet. Accompanying the Dais are two Triarchal Menhirs which wield Annihilator Beams. The Silent King himself wields the Sceptre of Eternal Glory, which wields the power of the Burning One.[8]

His personal warship is the massive Song of Oblivion[9]