"Lesser vermin, you trespass amidst the realm of beings beyond your stunted comprehension. Your presence dirties that which has been sterilised of organic contaminants, and cannot be bourne. Understand that the blame for this rests not upon your shoulders, but upon mine. I have baited this simple trap and, like the primitive post-simian carbon-based beings that you are, you scurried eagerly into its jaws. It could not have been otherwise. The fear, the confusion and the aggression that you are feeling, these are all natural responses from your underdeveloped cortices to such sudden and overwhelming stimuli. However, it is important that you master those base urges and set down your weapons without resistance. I would prefer to preserve your physical integrity for optimal interrogation, but understand, all I require are your brains."[7] 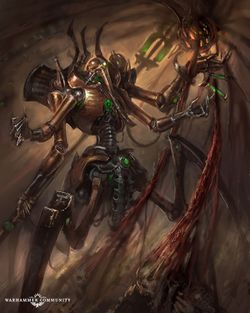 While the C'tan might have provided the knowledge for the biotransference, it was Szeras who made it a reality millions of years ago. Even then, he saw it as the first step on the path to ultimate evolution.[4]

Szeras constantly labors to unravel the mysteries of life, for he fears that he would be a poor god without the secrets of life at his fingertips. As such, he requires a constant flow of living subjects for brutal experimentation and agonizing testing in his scientific quests. He acquires experimental subjects by raiding the worlds of the younger races.[2] However above all else, he cherishes Eldar subjects, as they inevitably produce more intriguing results then any other of the galaxy's living creatures. Though he is obsessed with the secrets of life, his aptitude for augmenting the weaponry and mechanical bodies of other Necrons is peerless. As a result his talents are in high demand by other Necron Overlords.[1] Such is the demand for Szeras that he can name his own price - invariably a harvesting raid of a world of his choosing. Above all, he covets the Eldar for study and experimentation.[4]

It is known that Szeras waited on Nectavus VI for the day when the Warp would break free and he would behold the death of an entire planet. As around him erupts a cataclysmic event, Illuminor Szeras calls upon his lurking armies and begins to pursue his own inscrutable goals. The obsession of Szeras with the nature of biological life has led him to create new forms of repair on his own necron soldiers, and his experiments (in many cases) have improved the effectiveness of the mechanical bodies of his servants.[3]

Eventually Szeras was able to improve his own form. The dissection of Vuzsalen Arachtoid compound eyes unlocked an improved array for targeting optics, and the molecular disassembling of Ambull hide led to more efficient armor.[7a] He also wields devastating offensive technologies, using atomic manipulators to decompose his foes in the midst of battle or unleashing empyrean overloaders to destroy the minds of Psykers.[8]

Upon the return of the Silent King Szarekh, Szeras has joined him on the campaign to reverse Biotransference. Szarekh was able to convince Szeras that reversing the process he himself set into motion would give him the ultimate revelations he has been searching for.[8]

Since the formation of the Great Rift, Szeras may have worked with the Nihilakh Dynasty to erect the Pariah Nexus in the Nephilim Sector. Thousands within the Pariah Nexus have since been captured and brought to Szeras' laboratories for experimentation.[8] During the War in the Pariah Nexus he viewed the Imperial invaders as little more than vermin and hoped to study the effect the Nexus would have on them. However his trap soon turned into a series of frustrations for the Cryptek due to the presence of Ephrael Stern, whose faith-based power the Necrons had little counter for. During the battle on in the Tredica System, Inquisitor Draxus unleashed a captive C'tan Shard held at the heart of a Pylon complex. Szeras immediately lost interest with the Humans at this development and became desperate to contain the raging Star God.[7]

Szeras wields a unique Staff of Light known as the Eldritch Lance. He has also equipped himself with an Empyric Overcharger that can nullify psychic abilities.{Fn|7}}