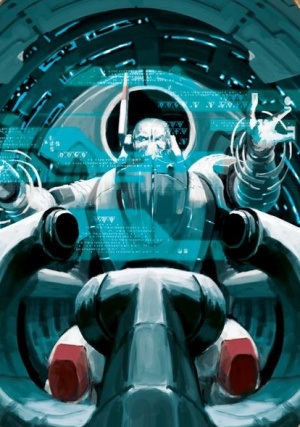 Shas'la T'au Sha'ng, better known as Longstrike, is a Tau warrior of the Fire Caste. Known as the Tau's most decorated tank ace, since his first training sessions he has exhibited a natural ability to handle the Hammerhead Gunship. Due to his superb aim and reputation, Longstrike was chosen as a test subject for the Tau's new XV02 Pilot Battlesuit, which allows him to interface directly with his Hammerhead and negate the need for a crew.[1][2]

It was on T'ros where the young Hammerhead pilot to become known as Longstrike first gained fame. As part of an armored interdiction Cadre, he was assigned to fighting in the western deserts and oversaw the destruction of countless Imperial Guard Leman Russ Battle Tanks. The Leman Russ tanks outnumbered Hammerhead gunships of his brothers at least six to one.[5] However at the peak of fighting, Sha'ng's bond-mates were all slain in the battle. Nonetheless he continued on, discharging Railgun after railgun blast, each destroying a Leman Russ in the distance. The tank duel went on until a squadron of Razorshark fighters appeared to finish the attackers. But even as the Imperial forces retreated, Sha'ng continued to fire at them and continued to score hits despite the distance. He even scored a direct headshot on an Imperial Warhound Titan, destroying the mighty war machine. After the battle, Sha'ng's exploits earned him the name of Longstrike.[3]

Longstrike was redeployed during the battle for Mu'gulath Bay during the Third Sphere of Expansion, where he destroyed innumerable Imperial gun and bunker emplacements. As the fighting moved into the narrow Hive streets, Longstrike's lightning fast reactions thanks to his XV02 Pilot battlesuit allowed him to destroy infantry attempting to emerge from cover and attack before they could even get off a shot.[3]

During the Taros Campaign (in which T'ros would be conquered for the Tau) a single Warhound titan was lost via railgun shot, but this was due to a Tiger Shark AX-1-0 with an Air Caste pilot.[4] How this is reconciled with Sha'ng's destruction of the same is unknown. 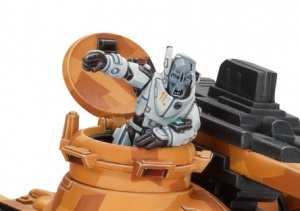 Longstrike in a Hammerhead Gunship[1]