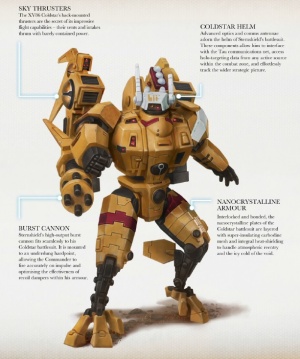 Commander Sternshield in his personal Battlesuit

Known for his resilience, perfectionist nature, and patience, Sternshield specializes in the Kauyon method of battle, using his Hunter Cadres as a shield for which he is named. He waits for the perfect moment to interrupt and blunt the enemy's attacks, airlifting his troops into battle via Orca. After preparing their positions Sternshield waits for his prey to come to him before launching a devastating ambush.[1]