Of the Tactical Space Marine, bedrock of his Chapter and paragon to his brothers, I shall tell thee.

He shall be steeped in the lore of battle and schooled in all manner of weapon and strategy. With combat blade, boltgun and grenade he shall assail the foe. But these are mere tools: a Tactical Marine's true weapons are his courage, his wits, and his dedication to his brothers.

He will bring his foe to battle in a manner and time of his choosing, never himself caught unready or ill-prepared for the task at hand. In defence he shall be stalwart as the mountain, a bulwark stood firm against the enemies of Man. In attack he shall strike with the wrath of the Immortal Emperor, felling the foe without mercy, remorse, or fear.
Roboute Guilliman, quoted in the Apocrypha of Skaros [1a] 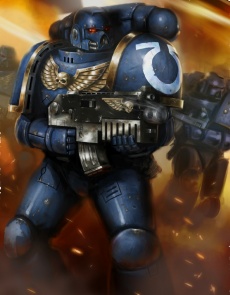 Prior to service in a Tactical Squad, Space Marines must prove themselves capable in all aspects of warfare by completing several campaigns in Assault and Devastator Squads, a process that can last years or decades.[1a] Not all Space Marines are able to make the transition, either possessing a particular talent or obsession within one area, or simply lacking the mental flexibility required to embrace the Tactical Squad's fluid nature.[1a]

The basic squad is made up of four Space Marines and one Space Marine Sergeant; up to five additional Marines may be added[1c].